Hi! Within this blog post I'd like to explain a bit more in depth how I went about creating my vegetation and what my thought process behind it was. This project was created in approximately 10 weeks, including the environment that I created with this vegetation. The Project page about these can be found here: https://xandravanantwerpen.com/projects/2xRroy

I started this project off by defining my learning goals which were:

Starting off with this project the first thing I did was to do research into what I exactly wanted to create and which art direction I wanted to take it. One of the major inspirations for my vegetation was Rare's Sea of Thieves, which was also the main creative driving force behind me creating this project. I defined the amount of plants I wanted to create and searched for in-game and real life references that seemed interesting and that I could use as a base to create my own plants. 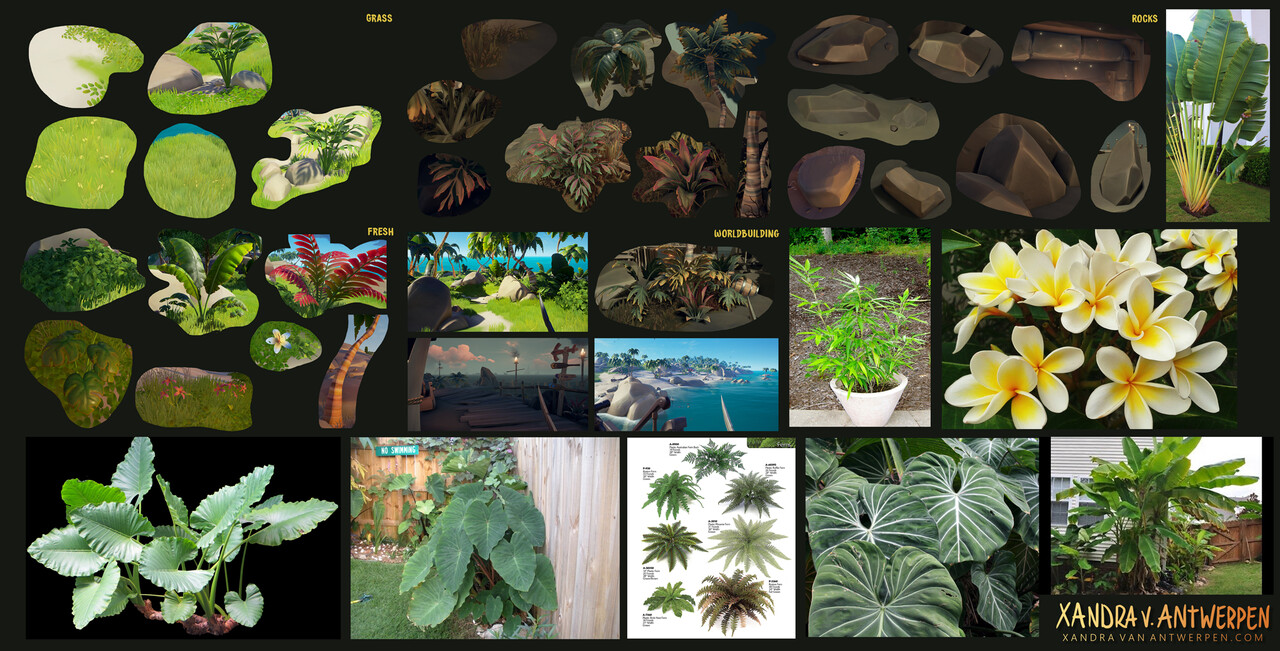 A small chunk of my visual research.

After I had established which plants and what kind of style I was going for I used Photoshop to first paint the main concepts I had and then refine them into textures. I tried to keep as much lighting data out of these and focused on subtle differences between each leaf and gave each plant enough variation possibilities. Next to that I created a floor decal for presentation purposed and to experiment more with decals in general.

I tried to keep the colors similar but with slightly different shades of green to keep it visually interesting and offer some variety between them. 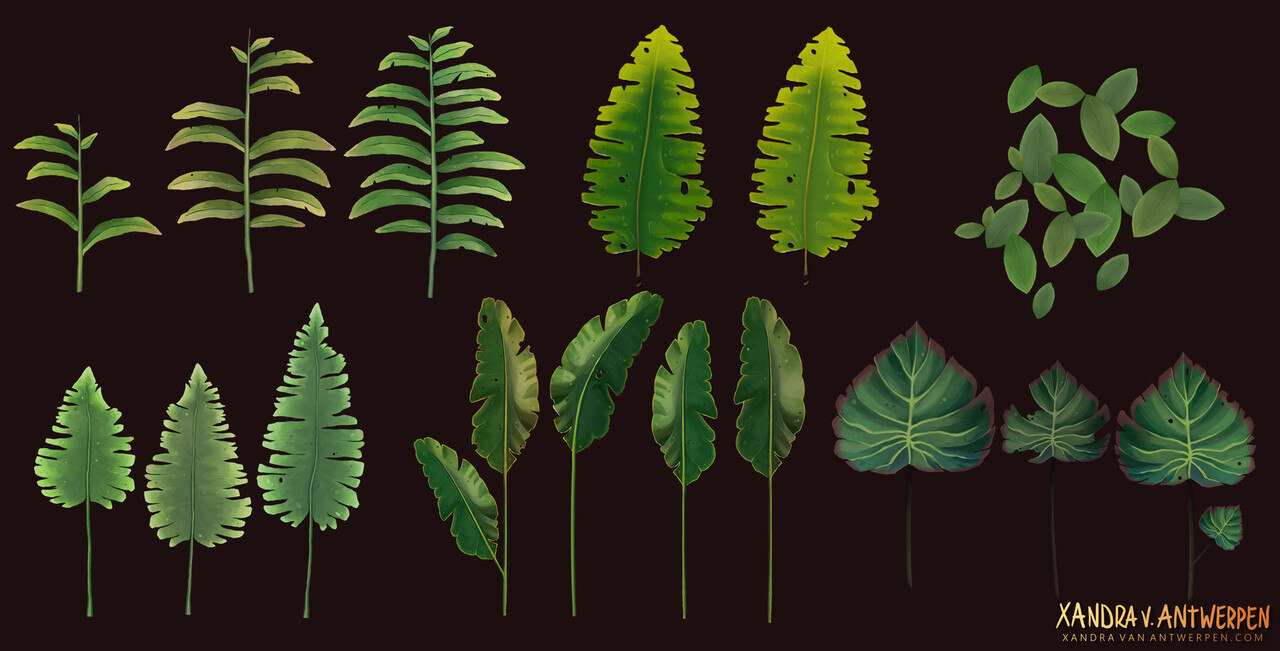 The eventual textures I created for the main vegetation.

Once my base color for the textures was finished, I applied a simple black/white mask to use within Unreal Engine 4. For the normal and roughness maps I used Substance Designer. I generated them and then made adjustments within Substance Designer. After that more tweaking on them was done within UE4 itself.

The next step was to create the models for my vegetation, which was quite a challenge in itself. I tried to simulate the main shapes of the real life plants, while often times pushing the curvature of the leaves.

After I imported my vegetation in Unreal I noticed that there was a lack of variety within my props as right now it only seemed to be plants. So next to my vegetation I created 2 tree variants, rocks, and flowers. To make the assets more grounded and add some floor clutter I created grass and imported my decal material as well. I iterated a lot within this stage on both the models and textures to get to the desired results. 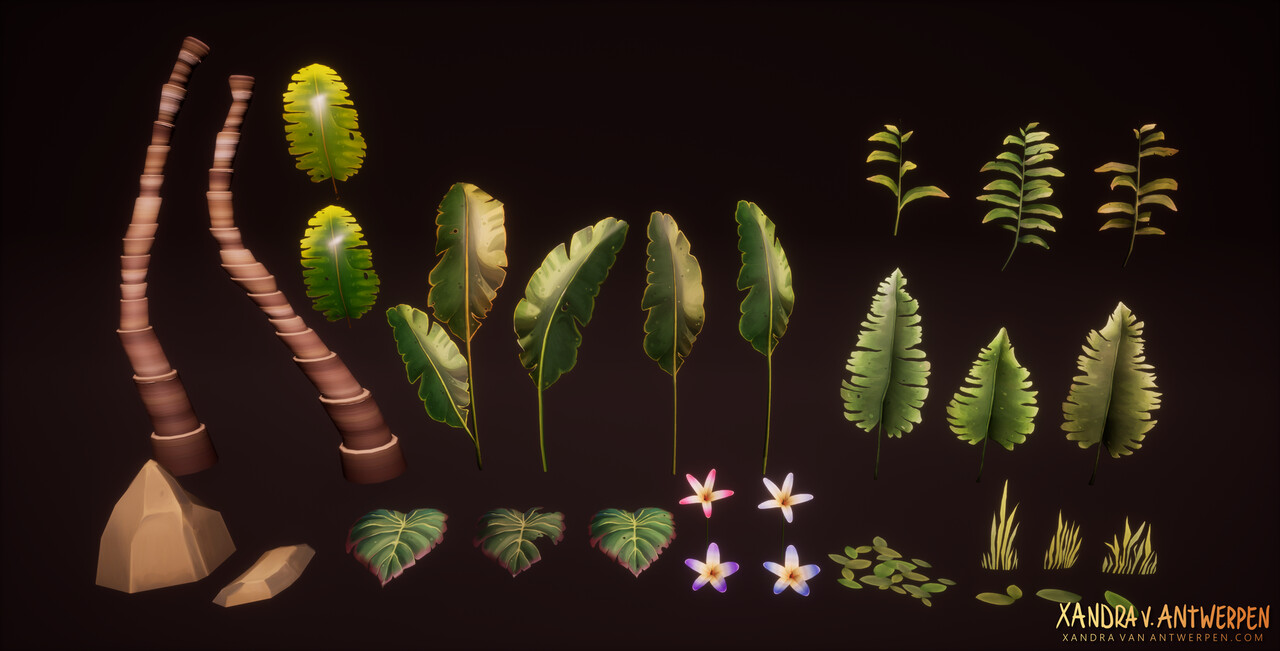 The models and textures within Unreal Engine.

During the project I had been thinking about a way to properly showcase my project, and I kept coming back to create a whole environment with them. But being extremely intimidated by creating an environment that doesn't feature a structure, or eye catching prop, made me hesitate. So I decided to take a step back and first create some prefabs, which was a nice middle stop before committing to an overall environment.

I wanted to create prefabs to make worldbuilding with them easier. So first I created the actual plants with the individual leaves I had made, and later focused on smaller clumps of assets that built up a nice composition. After I had made the majority of them I asked a level designer for feedback on how he would use them, which made me iterate a lot on them, especially paying attention to creating big pieces, but also smaller ones.

For the lighting I kept it very basic and created a warm feel to the overall plants. From here on it was just tweaking and iterating on all the previous steps until I got to the shown results. Bigger pictures can be seen here: https://xandravanantwerpen.com/projects/2xRroy

Thank you so much for reading this and if you have any questions feel free to reach out through Artstation, E-mail, or Twitter!